Originally posted to a separate blog on January 12, 2016 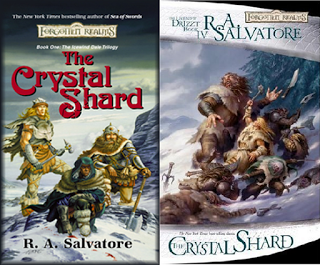 While nowadays labeled as Book 4 in the Legend of Drizzt series within the many-authored shared universe of the Forgotten Realms (itself one of a number of campaign settings for the Dungeons & Dragons tabletop roleplaying game), this particular entry, The Crystal Shard, was originally released in 1988 as R. A. Salvatore’s first published work. It was also the first volume in the Icewind Dale Trilogy, a slightly misleading name for the series since this is the only book of the three to actually take place in the geographical region called Icewind Dale. It’s worth noting that while this book provides a lot of world-building for that part of the Forgotten Realms, there’s also no direct story connection between the Icewind Dale Trilogy and the two PC roleplaying games released under the title of Icewind Dale — they simply take place in the same geographical part of the campaign setting.

The Crystal Shard — set against the many Forgotten Realms novels, video games, and other related products that exist nowadays — is easy to think of as inferior to many of its brother and sister works. Before picking this one up, it’s worth knowing that at the time of its publication, the Forgotten Realms setting itself was very new as a D&D product line, the first game products having been released in ’87, the year before. As Darkwalker on Moonshae by Douglas Niles was the only book in the setting to exist prior to this one, Salvatore’s debut work is the purest example of an entry point. Together with the following two works in the trilogy, Streams of Silver and The Halfling’s Gem, this book thus focuses on three elements:

As such, The Crystal Shard is characterized by its adherence to the basics in many areas. The main heroes are an elf (albeit a sub-race that was never cast as heroic before this), a dwarf (of the most stereotypical variety), and a human male (though his origin as a barbarian provides an interesting arc for him). The villain is a vain, bumbling wizard who stumbles upon an ageless, evil artifact of great power and sentience (the eponymous Crystal Shard). The chief threat to the safety of the region arrives in the form of a legion of goblins, orcs, lesser giants, and trolls which serve this evil wizard. Throughout the adventure, the pace and tempo are kept moving at a nice clip from beginning to end, starting with the first act’s preliminary war with the unified barbarian tribes of Icewind Dale, a more short-lived peril which occurs in parallel with the slower introduction and development of Akar Kessell, the wizard apprentice who finds the Shard. And over the course of the story, both a demon and a dragon stand as adversaries for the story’s two chief protagonists, with the balor Errtu bearing similarities to the classic balrog and the dragon differentiating itself from Smaug only by employing ice breath instead of fire. Magical trinkets and weapons are forged and found, and though the story splits off to follow several characters on their different paths through the adventure (much as J.R.R. Tolkien’s The Lord of the Rings trilogy did on a larger scale) the story never deviates from the tried and tested basics of what makes a fantasy adventure feel magical, epic, and exciting to follow. It plays out as a particularly exciting low-to-mid-level tabletop campaign might, except with a lot more narrative structure and focus.

The major story hook that sets it apart from other novels of its type from around then is its main character, who at this point in time almost requires no introduction. Drizzt Do’Urden, a heroic ranger of the “dark elf” sub-race which at the time was considered universally evil in D&D, does not dominate the adventure as an almighty invincible swordsman as he would come to in some later novels, nor does he weigh the story down with undue focus on his own troubled life as a drow who has forsaken his heritage or other such angst-ridden concerns. It is in this novel that Drizzt, not yet identified by his author or his publisher as the quintessential D&D cash cow, made his debut. And it is partly this even-handed use of the character that made him so interesting at the time.

Over the course of The Crystal Shard, and the following books in the Icewind Dale Trilogy, Drizzt stands out as a fantastic protagonist without being hyper-competent or stealing the spotlight from either the setting itself or the rest of the cast, feeling as much like another player at the D&D table as the main character of a novel. Start-of-act journal-like essays (added to later editions of the trilogy, I think, as I don’t believe they were in the copy I read as a kid) provide additional insight into Drizzt’s personality and outlook, speaking directly on the story’s themes without intruding on the plot or bogging the overall product down with preachiness, giving Drizzt an introspective, philosophical side to go with his reckless bravery and martial prowess. The pacing of Drizzt’s portrayal as it was handled in this book, which I can’t help but feel the author lost his grip on after the later novel Starless Night, is very well-done here. In re-experiencing this book again after so many years, I find myself remembering quite fondly why I loved this character and his adventuring companions so much when I was introduced to them in their heyday.

The rest of the cast is likewise entertaining, although coming at this book after reading future entries is a little awkward at points. For one thing, the first three books listed under the Legend of Drizzt title, originally the Dark Elf Trilogy, are Drizzt’s origin story set prior to Shard but were written later on, well after the original run of Drizzt-centric novels had concluded. Reading the books in chronological order does for the writing of The Crystal Shard what watching the Hobbit film trilogy before the Lord of the Rings movies does for the action and special effects. It’s pretty obvious that Salvatore had improved by the time Homeland, Exile, and Sojourn were completed and published, so without knowledge of the original publication order, The Crystal Shard can appear to be an inexplicable dip in quality and complexity. Furthermore, the inherently “basic” nature of this Dungeons & Dragons story, while serving well as an entry point, can feel underwhelming compared to the more inventive and complex stories later released under the Forgotten Realms brand, a theme that continues to a lesser extent throughout the two books immediately following — The Halfling’s Gem being the least by-the-numbers adventure of the three.

There are only two parts of this story in particular that feel unwieldy to me. The first is the character of Catti-brie, who in later books is written as both a more prominent character and with dialogue in a dwarf-like accent which she inexplicably does not display in her appearances here (despite speaking with it in Sojourn, directly before this book, and in Streams of Silver, immediately after it). She does nothing worthwhile but the narrative insists that she is strong, fiery, and independent, which kind of feels like the book wanted to make her the token female warrior but gave up halfway through and settled for having her say some mildly interesting lines of dialogue here and there while taking great pains to describe how much her eyes sparkle, the “tell, don’t show” approach to writing female leads in stories that has produced such classics as Naruto‘s Sakura Haruno. Drizzt also refers to her as his most trusted friend and companion, but we are given no context for this connection within the book itself, resulting in Catti-brie’s inclusion here feeling forced in general and awkward in the context of books to come: Catti-brie is one of the most interesting and frequently-utilized members of the “Company of the Hall” in later stories. Seeing her so minimalized in her role and half-assed in her characterization can come off retroactively as insulting to the character.

The second unwieldy portion of the book is the dragon that happens to be involved in the barbarian Wulfgar’s portion of the plot. While the scenes involving this dragon are well-done on many levels, this particular part of the story feels sudden and tangential when it occurs, because of all of the other plot threads involved in The Crystal Shard — from the barbarians to the political conflicts of Ten-Towns to the dwarves to the demon who ends up being summoned by coincidence into the world in time to take part in the events that would follow — the dragon is the only part of the story that receives no build-up and only a very small token bit of foreshadowing before it happens. When it does happen, it happens with style, but it feels almost like a one-chapter side story than a real part of the novel. The inclusion of a dragon feels forced, as if it were an item on the checklist of Fantasy Adventure Staples the author needed to include. Unlike other dragon encounters in fantasy fiction, such as Smaug in The Hobbit, or even Shimmergloom the shadow dragon in Streams of Silver (again, the book right after this one), the encounter with this particular dragon falls flat and leaves a lasting legacy not so much in the imagination of the reader as on Drizzt Do’Urden’s own weapon belt: the enchanted scimitar that Drizzt acquires during this sequence would go on to become one of the signature weapons he still carries through his adventures to this day.

Apart from those stumbling points, though, The Crystal Shard is a great time from beginning to end. If ever there were an example of reading a Lord of the Rings movie in book form, it would be this. While there are certainly better fantasy novels out there, and far more interesting ones to choose from within the Forgotten Realms line itself, The Crystal Shard is one I’d recommend that every fan of the genre read at least once, either to re-acquaint themselves with the basics of these kinds of stories, or to see one of the earliest examples of what made both the Forgotten Realms and Drizzt himself so popular among fantasy RPG and novel fans in the first place.

The Crystal Shard can be bought on Amazon in paperback, hardcover, and e-book formats, and can also be enjoyed as an audiobook.

Notes on the audiobook version:
Victor Bevine’s narration is quite good, giving the characters suitable voices and adjusting the drama of delivery appropriately for most scenes. However, I feel that some of the subtleties of tone are lost in the narration and there were definitely a few places where the narrator misspoke or misread a word. The audiobook also contains the Prologue, opening Drizzt essay, and first chapter from Streams of Silver as a teaser at the very end, after the credits.

On Audible, the audiobook is compatible with “Whispersync for Voice” and can be bought at a discount if you own the Kindle e-book counterpart. On mobile Kindle apps, the audiobook can also be downloaded and set to narrate along with the e-book, although one page partway through does not appear at the time of this writing to have been programmed to follow its corresponding audio and will not “read along” until the audio moves past that page.

3 thoughts on ““The Crystal Shard” by R. A. Salvatore — Book Review”

We are four friends, nerds, gamers, random people who have come together to talk over video game recordings and have somehow gained recognition doing it:

Witness our unprofessional ramblings. Or don't. I mean, nobody's forcing you.
*twiddles thumbs*